This week went pretty well overall, and even had a bit of excitement toward the end here. Mansfield is hosting some pretty awesome concerts this semester (which is a first). Today I saw the Craggs, who are an old Australian folk group. They are playing their main show tonight, but they played a gig in the cafe in Alumni Hall this afternoon, which was cool, and I was able to see them. There weren't very many people, lamentably, and I started to feel like I was getting a private concert after a while... which was cool I guess. A girl told me that it cost the University like $20,000 to have them come... so hopefully they will have a better turn out tonight, not that it would be unusual for the student activities committee to blow some obscene amount of money on an event and then have no one show. I myself though, thoroughly enjoyed it, and so I'm glad they did. I talked to them a little afterwords, and they were really nice. The other thing that brought me to Mansfield today was buying a ticket to the big concert event of the semester: The All American Rejects, Taking Back Sunday and Anberlin. How they convinced them all to come is beyond me... but it should be awesome, and I'm sure someone other than me will show up to it. 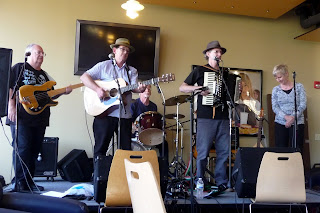 I've been watching the Matrix trilogy, which I really enjoyed. I had pretty low expectations for the second two movies, and after I heard all the bad things that people said and wrote about them, but I must say I was pleasantly surprised. If anything, my main critique is that they completely switched genres in the middle of the series. It started as a shoot-em'-up thriller, and morphed into a sci-fi epic... and so I think the alienated a lot of their fan base. Regardless though, I think they are all well made, and thought provoking. In fact, if you aren't too distracted by the way cool kungfu fights and slow motion gun battles, they are actually are real 'pageant of philosophy'. I think almost every single person Neo meets exemplifies a different school of thought.
So anyhow, I watched the Matrix Reloaded the night before last. There is a big car chase sequence in it, with lots of sirens blaring. I was awakened from sleep at 3 am by the sound of sirens... lots of them... which is almost unheard of since we live in the country. I sort of thought I was dreaming and went back to sleep. The next afternoon though, I found out that a house down the valley from us had burned to the ground. It was brand new, expensive, and has sat without being lived in since it was built about three years ago... so I must say, the whole things seems rather suspicious to me... but at any rate, it's gone now: 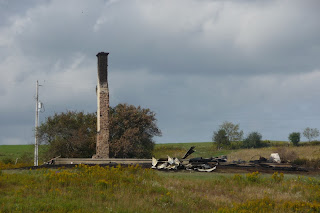