A Really Fun Place To Get Marooned 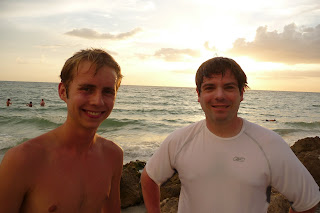 My friend Joe (above right) and I were originally intending to leave as soon as we finished unpacking, i.e, this past Sunday. The Efthimious however were relatively intent on taking us to the beach. This sounded like fun, so we decided to postpone our departure a day. Before going to to Caspersen beach, Joe (a former Coast Guard) had the idea to go buy some snorkel gear, and we did (pictured below) 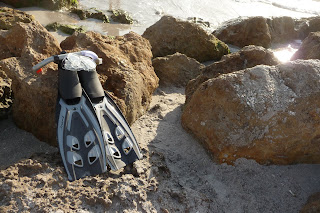 We had a great time snorkeling, even though there were some annoying waves and the visibility was poor. It seemed like a waste to go back to the frozen and beachless north so soon, and so, we decided to postpone leaving yet another day (today) which was spent at siesta key. On arriving at the beach we had to walk over a mile along the surf to get to the reef area, but it was worth it. We spent the whole morning swiming with schools of fish and exploring the crab infested nooks and crannies of the area. We intended to go out again this evening, but an electrical storm (there has been one every night!) prevented us from doing so. Joe decided to let one my younger cousins dye his hair, as a final sort of "last hurrah" before leaving north in the morning. On the way back however, he discovered that Stephen's car had a tire held on by only two lug nuts ready to fall off at any minute (I had wondered what the strange clacking noise was earlier). This was a big issue, because it is the car we intended to leave in. So I am now stuck here, somewhat indefinitely (though hopefully only until the day after tomorrow) when the car is repaired. I have to say though, for being unable to leave three times, and now getting stuck here without transportation, it's a really fun place to marooned!

I figured out some settings on my camera just a few minutes ago and was able to capture some beautiful photos of the standard evening lightning storm they have here in Sarasota: 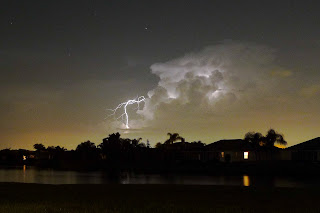 Incredible lightening picture! Now you need to get an underwater camera to go with the snorkeling gear!

How did you get that lightning picture? An interested photographer-in-training wants to know. (a.k.a., me)

I have a "starry night" setting on my camera that keeps the shutter open for a long time (15 secs to a minute). It's made for taking pictures of stars, but it works well for lightening. I don't think most cameras have that setting, but if you look in the manual there might be some way to get the shutter to stay open for a long time.

for it to work though, you need to set the camera on something so that it stays completely still.