On the Destruction of Books, Balloons and the World 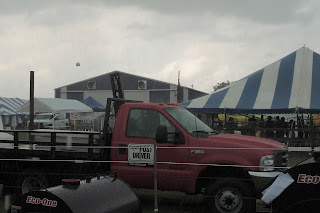 So, there has been a slew of wicked thunderstorms around here lately. One tore through Ag Progress Days, the show I was working at for ThisWarmHouse in State College PA. The show covers a large area of ground along the base of a valley surrounded by hills on all sides. Around four o'clock one of the guys working at our booth noticed what looked like a wall of fog quickly approaching us down the side of a hill. Two minutes later we were all huddled under our pop up tent hanging on the rafters to hold it down against the gusts of wind, driving torrential rain and lightening strikes on all sides. We got away without any loss to speak of, but this was not the case of many exhibitors... particularly those with large helium advertising balloons. In the above photo you can see on blowing away.

Last evening, I heard some near by friends posting on facebook that they were watching lightening. Sure enough, as soon as I crawled into bed, I was kept awake by bright flashes of light the kept illuminating my whole room (and the sky for that matter). I couldn't sleep and ended up going out side to try and photograph it. I was somewhat disappointed with the results, as most of the chains were hidden behind clouds and didn't produce results nearly as spectacular as those that I recently captured in Sarasota. Still, it was awe inspiring to watch. On the way to and from the field where I was watching, I walked passed the book that I had been reading: Oh Pure and Radiant Heart, by Lydia Millet, a future/historical (it's complicated) novel about the scientists who developed the Atomic Bomb coming back to life in the 21st century and leading a campaign for nuclear disarmament and against the destruction of mankind, which I had left on the arm of a chair in our yard that afternoon... completely oblivious to it's presence in the darkness. I felt the wind pick up and returned inside. It started to rain - hard, and a second before I fell asleep, I remembered that I had left the book outside, but managed to convince myself that I had left it at my parents house and was just being paranoid. I didn't think of it again until I happily walked across the deck in the morning to make breakfast.

I seem to have a knack for destroying books with water, and wouldn't have been terribly upset if it weren't that it was a library book... and I don't really know what I'm going to do now. One bit of thought from the book (which is surprisingly chalked full of philosophy) was that the fact that you're paranoid doesn't necessarily mean that your wrong. I should have remembered that last night as it started to rain. 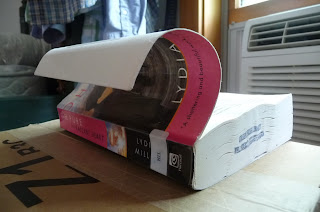 oh the irony of it all.

so is your academic life on hold for a while?

no, although I almost wish it was. I'm picking up back at Mansfield this coming Monday.

Are you going to be graduating soon Han?