So I finally went and did it. I bought a highway GPS. I'm so terrible with following directions and being aware of my situation that I had decided if I ever had to drive anywhere long distance I should get one. Coming back from Florida of course seemed to be a good excuse, and thus, I went and grabbed one at target. I bought the garmin nüvi, the cheapest model of the garmin I could find. Not only had I had a chance to witness both the garmin and the tomtom models in action, but had also heard a great deal of impassioned input from at least six people as to which was better. After using them both however, I harbored the suspicion that they were both really about the same. The garmin matched my own style though, and the model I wanted was $30 off that morning, so I decided to get it: 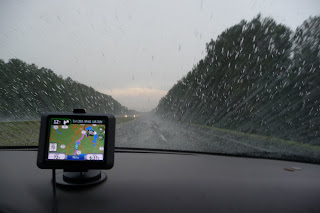 While being led home by the GPS, I was able to have nearly 24 hours of conversation with my traveling companion, Joe, which was cool. We had originally planned on making the trip back in one long shot, but realized that we both had relatives along the way. I was able to stop and see my Prutsman cousins in Tallahassee FL, and we spent the next night at the home of Joe's Aunt near Charlotte North Carolina.

So, now that I have the GPS and am getting to know people in more and more far flung places of the country (and beyond for that matter) I may feel more confident about going on some long solo cross country trips in the fairly near future... I will need to get my car back first though... which has been at the mechanics for two weeks... and it may well be that the bill from the procedures that kept it there for the afore mentioned time may be enough to erase any ideas of spontaneous travel from my short term radar.

I love the Garmin Nuvi. What's your favorite voice? I like American Jill.

I haven't actually messed with all that stuff yet, but I'll be sure to try that one out when I do.