Yurts, Pogo and the Lords and Ladies of Catan

Yesterday I arrived back from a whole wonderful week of camping with the Spanos. It's something we try to do every year and this was one of the best years ever. We stayed for an entire week and had good weather for nearly the entire time. Usually we only stay for a few days (most of which rain) at most, and it always seems as though we are just getting into it when we have to pack up and go.

My parents and the Spanos stayed in Yurts while brother and sister and I slept out it tents along with Marty and Lisah who rented a site across the road (by the time it was done our group took up and an entire segment of loop B, which was nice)

We went biking and canoeing and went to the beach several times, on one occasion building what everyone who saw it deemed 'the coolest sand castle I've ever seen in real life'. For the first couple days Lizzy's friend Briana came, and Nickie's friend Brooks arrived after that. Nicky and Isaac him had an ongoing pogo stick contest. I brought Settlers of Catan, and it must have been played seven or eight times a day.

I was a little bit depressed for the first half of the week, but felt better after that. I brought Jordan down from Corning for the last couple days, which was the first time I've ever had one of my friends accept my invitation to come. We played guitar until the neighbors came and complained.

I also ran around the Lake, which I had amazingly never done before. It was cool to see something that I had seen so many times before from a completely different perspective. I also ran with Nick once, which was really fun.

Europe seemed to be the topic of conversation, Lizzy having just arrived back from touring Britain, France, and Italy a day or two before. We swapped a lot of stories about our experiences in the places we had been.

Here are Mattea, Isaac and I canoeing. 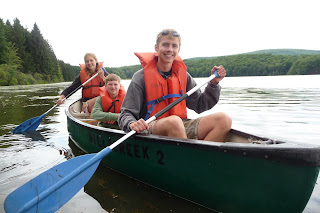 Here is Isaac on the infamous pogo stick. The thing in the background is one of the Yurts. 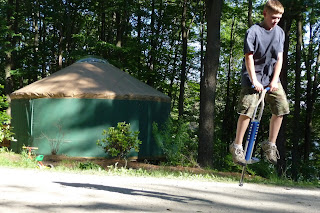 The moon one of the first evenings there: 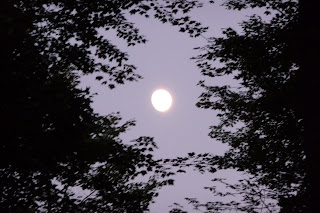 The sunset over the lake looking from the spillway: 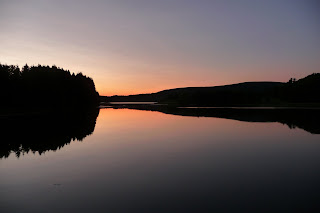 Mattea, Maryah, Lizzy and I on the spillway: 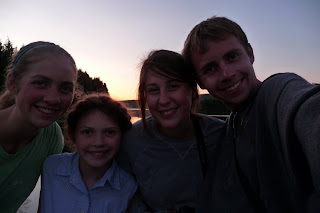 Yesterday we broke camp and went to the beach, at which point I got the sunburn, that I had been trying successfully to avoid all week.

After that I took Jordan home to Corning. On the way back I stopped to visit Joe and the Cornfields and ended up staying late to watch a Harry Potter movie with them. I was really tired on the way home and almost hit at least three deer. Fortunately, I don't seem to possess the gift of sleeping easily, and can hardly fall asleep in a car if I'm riding, let alone driving.

Today, an old friend of mine, Riah Markell, got married. It was the coolest wedding I've every been to. I have actually been to several weddings in the last year that have shaken my bias against them.

I met a girl there named Malory who is an artist and was actually in Venice painting at roughly the same time I was, though I never saw her. So that was cool, and I may talk to her some more tomorrow at home church.
Posted by Andrew at 7/11/2009 10:29:00 PM

Yep-that is exactly how it was! The best camping trip ever I would say.