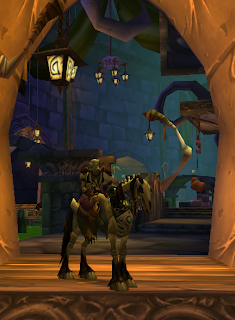 Yesterday I took my car into to get a whole bunch of stuff done to it. Will probably need knew rotors and breaks (in fact almost certainly) and I'm having new wheels and tires put on it. I was worried I wouldn't be able to go to Bible study tonight because of it's absence (and my Dad being gone in Minnesota), but my Mom let me borrow the Mercedes, which was good. I had a great time tonight. It's the best group of guys I've ever had to do anything like that with.

In other news: I finally got my mount in WOW. It's pretty sweet: 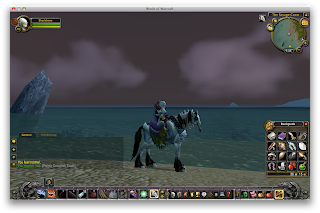 It took me until level 38... which is a pretty long time. But I figured I should probably focus more on leveling than trying to get expensive toys (just learning how to ride costs 30 gold) but now that I have it, I think I'm going to wish I had had it sooner. A lot of the time you spend in WoW is just walking around (due to the fact that it's a fairly life sized world) and having the mount greatly increases the speed at which you can get around (duh) so it should actually help me level faster. Anyhow... tis all vanity... but then, so are most things really.