I woke up at 4:30 am yesterday and got around. At five, our whole family left for New York City. We stopped in Williamsport PA to grab some bagels and coffee at about six, and made it to NYC about four hours later. We met my uncle and his family at the apple store in front of the Plaza hotel. It was good to see all of them again. My cousins, Michael and Jordan both seem a lot older than last time I saw them... which I guess is to be expected for having not seen them in two or three years.

I went to a Niki store with Michael and Jordan and my Aunt Kim. It was six stories of nothing but Niki products. I didn't buy anything, but it was interesting to look at all of it. I never really knew that Niki made anything but running shoes.... After that we went to Central Park, and the Zoo after that. Then we went to my cousins hotel suite on time square, which was really cool to see in real life. We took the subway there, and I have to say it was one of the worst subway experiences I've ever had. The ticket machines would only let you by one ticket at a time if you used cash, and there were 13 of us, so it was going to take forever. To save time (he thought) my uncle bought a single 20 ride ticket. It stopped working after only about the sixth person through though, and he couldn't get them to refund it. So he ended up having to buy more individual tickets. All said and done, we had spent forty or fifty dollars on what ought to have only cost 25, and missed our train anyways and had to wait twenty minutes for another one. Time square was worth it though (not to mention that none of the money lost had actually been mine) 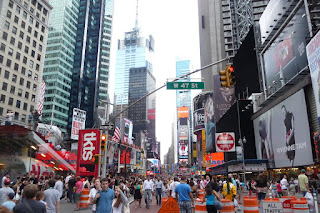 On the way out of Central Park, I saw what happens if you try to keep your bike safe there by chaining it up: 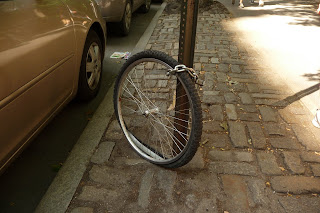 Here is the roof top of one of the Museums we went to. My Uncle and his family somehow sneaked passed security and my parents found out that if you refuse to pay the actual admission fee, you can name whatever price you want to... which was all somewhat embarrassing. Then, my parents tried to take a stroller into the building, and we ended up getting stopped and separated in an elevator because of it. We did eventually make it to the roof however, and it was really cool. There was a bar on top, and and bunch of hip looking people hanging around chatting, so it felt more like a club or lounge than I museum. That was one thing I noticed in New York City: lots of hip looking people. It felt kind of like being back in Europe again, and even more extreme in some places we went. I rather like it really. 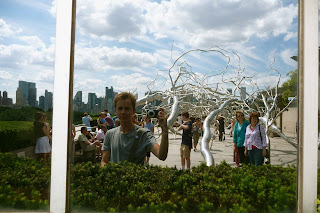 After all that we ate at Virgil's barbecue and then went to Rockefeller Center and paid to go up to the roof. It was beautiful. I'm so glad to opened it up to the public. I got lot's of good photos, as well as a better sense of how the city is laid out. 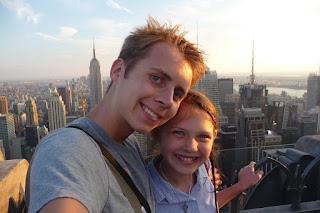 After that we separated, but my cousins should hopefully be arriving here sometime this evening.
Posted by Andrew at 7/20/2009 04:34:00 PM