After going to New York City this past week, we had my cousins up to stay at the Inn. It was a lot of fun, and while I always feel like it's kind of boring here for someone who lives where they do, I think we all had a pretty good time. My Uncle Eric's main objective in coming here was apparently to go blueberry picking. The farm that we usually go to wasn't open yet, but last year my Mom discovered a little patch (well, actually it's pretty big for an unkempt patch) up in the hills that we went to. We made blue berry and black cap pie from the berries we picked with my cousins the day before. It's been a great black cap year - cool and with consistent rain. 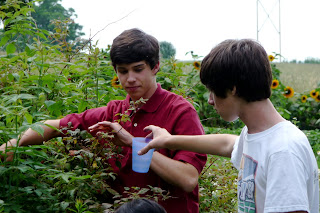 We also went to Hills Creek where they rented a boat. I got that out of my system for the time being when we went camping, but ended up going for a run around the lake. My Papa T (Grandfather) came up almost every night, and it was good to see him. I know that my cousins went to visit my grandma also, who has been in bad shape for some time now. Apparently she seemed to be doing well when they met here though. 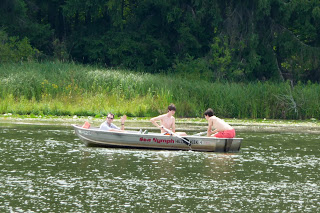 Today we went to Ithaca with the Spanos. We started the day at a running store where Sue must have tried on about six pairs of running sneakers before settling on a pair (trying them on at this store involves having your stride analyzed, walking around, and finally running on a treadmill. After that we went to a second hand store where I bought a shirt. I like shopping there because, while I like the whole concept of recycling and super cheap clothes, nobody in any of the places roam around here wears anything that I would where... and thus, nothing that I would wear ends up in the second hand stores. Ithaca on the other hand, is a hip kind of place, and on top of that, it's home to Cornell University, which means tens of thousands of rich college students who buy awesome new clothes every season and then think nothing of parting with them for nothing.

I really rather like Ithaca, and not just for the afore mentioned reasons. It has a sort of anything and everything goes mentality that is completely alien to the larger part of the culture surrounding me for three hundred miles on every side. People are friendly, and interesting and interested in things that I am. On top of all that, it has a ton of cool restaurants and shops, is surrounded by the hills and woods that I love about this area and sits right at the southern tip of one of the finger lakes. So yeah... perhaps I will move to Ithaca some day. If I were smart and rich, then I would go to school there... but seeing as I was somewhat passed over on both those blessings, that's not an option right now. Maybe I could just move there and be a hippie... or maybe some day, if I go to graduate school and become a professor I could teach at Cornell (then, it wouldn't matter that I lack problem solving skills, and as far as money goes, they would be paying me) any how... I don't really like plans... so for now, I just have a vague desire to live in Ithaca.

After stopping to get bread and hummus as the Ithaca Bakery, we went and had a picnic and Taughannock Falls State Park, just a little ways around the lake. If you remember my post from going there two years ago!, we found a lot of strange towers made of rocks. I was kind of hoping it had turned into a lasting tradition, but alas, there were none today (aside from one that my sister built, perhaps hoping to rekindle the craze) The ravine was still as stunning as ever though... I think that regardless of how it came to be, stuff like that is a great tribute to God's creativity. 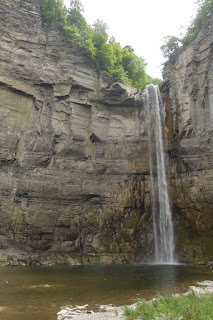 After that, we went back down to the park area, and some of the smaller members of my family went for a swim. I took this picture of my sister as she was drying off: 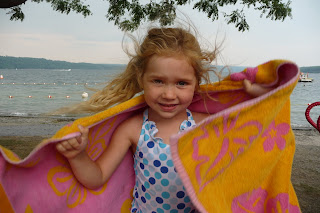