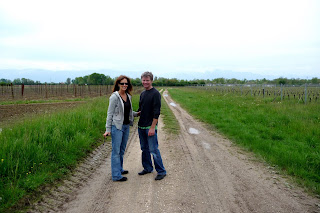 Well, my Mom and Dad showed up in Italy today.

Actually, it had sort of been planned from the beginning, but it was so up in the air for so long because of money and things that I had almost stopped counting on it when I heard from my sister Maryah that they were coming for sure. So it was so great to see them again that I can't even really write it. What's more, everybody here thought they were really cool, confirming the festering suspicion that I have had for a while that my parents are in fact, really cool. They ended up going out with Samuel and Amber Spatola for coffee and made friends with them... which is almost weird, but anyways, I'm really glad to see them again. They are going to travel around by themselves for the rest of the week and then come back and pick me up on Sunday to spend the day in Venice and the leave for the States together.
Posted by Andrew at 4/21/2009 03:43:00 PM

i could have confirmed that suspicion previously : D

My parents and sibs are enjoying your photos! So am I.