On our second day in Rome we visited the Vatican Museum. It has treasures and art work from Egypt and Greece as well as ancient Rome as well as a lot of modern art. Here is the Caesar of Prima Porta: 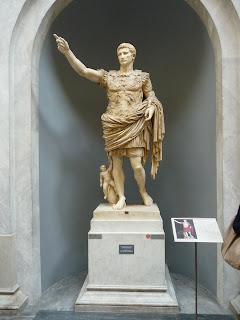 This is who I believe to be the Roman God Janus. He was the God of beginnings and of history in a sense, because he can see both the past and the future: 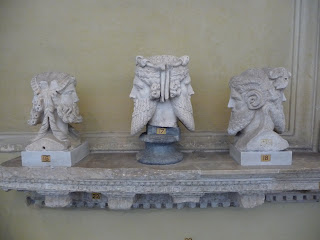 Here is the hall of maps - they were beautiful: 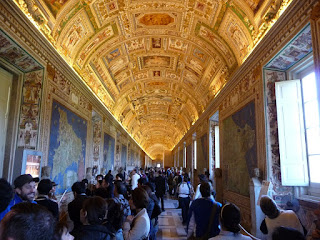 Here is an illustration from one of them: 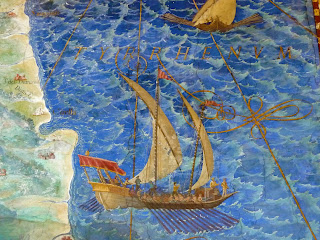 Here is the roof of the Sistine Chapel: 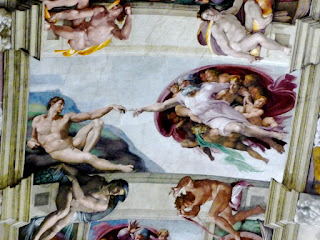 Here is the School of Athens by Raphael; it was one of my favorites. Jennie Tes and I somehow took a detour past it walking through the museum, and because of how they have it set up, it's impossible to back track, so, with little time left, we ended up racing through the entire Vatican Museum as fast as we could. We finally made it, and it was worth it! 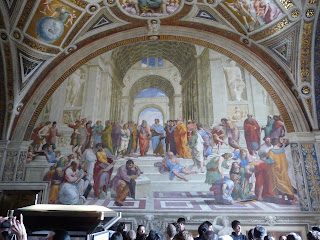 There may have been more Asian tourists in Rome than Italians.... 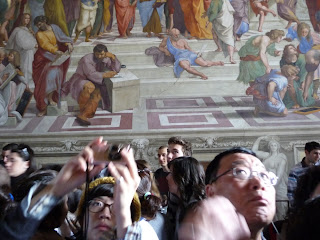 Speaking of running, we this is a view from the top of St. Peters, which we also raced up: 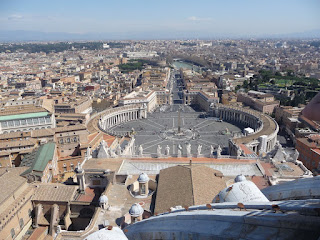 Jennie and I looking in what we thought was a mirror. It turned out that it's one way glass with security guards behind it... I bet they were laughing: 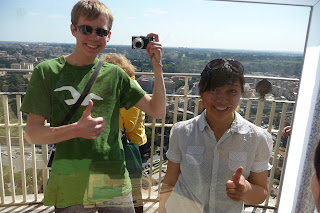 Chad, myself and Jonathan... we didn't color coordinate on purpose. 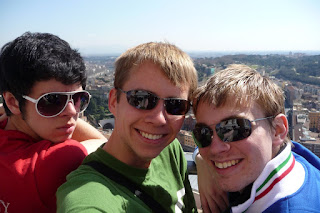 Here is inside St. Peters... it has to have been the most over-the-top thing I've ever seen! The whole time though, I couldn't shake the knowledge that it was built, largely with money extorted from the poor of Europe through the sale of indulgences (the very one's that Luther started the reformation be complaining about) and with the sole purpose of consolidating the Roman Catholic Church's legitimacy of power... so I guess there was a little bad taste in my mouth the whole time... it was still mind blowing though! 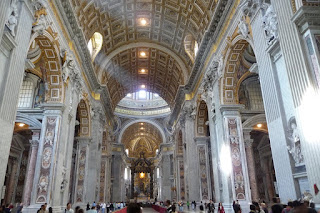 That is funny about the one-way glass thingy :D

mattea kiriel said...
This comment has been removed by the author.
8:40 PM

This all great! Thanks for the update and the education!

The Color Corodination reminds me of the Powerpuff girls. Which I take as a sign that I've been researching cartooning just a little too long....

Seriously though, more of the same comment-age from me: Flippin Sweet! I am filled with insurmountable jesalousy! This is so cool! etc. etc.

I found Gollum! (I'm a little behind, I know)

I am filled with jealousy. After studying those countries history for so long, I want to see them! The pics are great, though, and your stories. Mom is enjoying them, too.