Thoughts On This Most Recent Conflagration In Gaza 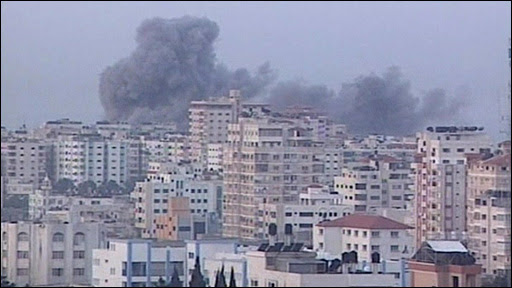 I've had a rather nasty cold the last couple of days. It's kept me from sleeping too well despite spending a lot more time trying to sleep than usual. It seems like I get a few of these a year and there isn't too much I can do about it. This go round though, I've been distracted from my own silly, insignificant worries by events on the news; namely, the Palestinian-Israeli conflict in it's latest and most volatile manifestation in Gaza.

It's a bad situation. In early 2007 seven, the radical Islamic political party Hamas won control of the government in the Palestinian controlled Gaza Strip, a tiny bit of land sandwiched between Israel and Egypt. Hamas began a series of rocket attacks on Israel - who responded by literally sealing off Gaza from the outside world with fences on land and a naval blockade at sea. Rather than stopping Hamas however, the siege only seemed to steel their resolve to inflict as much damage as possible on the Israelis and caused outcry against Israel (or shall we say, an intensification of outcry against Israel) throughout the Arab world.

In response to the latest and worst yet wave of rocket attacks on Israeli civilians, the IDF (Israeli Defense Force) began launching air strikes against Hamas in the Gaza Strip and followed today with a ground assault.

On the surface, the good guy in this fight would seem to be Israel. After all, it was Hamas who has been attacking them all this time, and a nation has an obligation to defend it's people. This was the view that I had always had, and it made sense. Being a Christian, I have a tendency to sympathize with the Israeli people. I have friends who are Jews - and even acquaintances who's children are currently in the IDF and may at this very moment be part of the ground assault striking into Hamas held territory. Why do the Arabs have to hate Israel so much? And why do they repeatedly attack the Jews? I could see no reason other than that they must be poisoned by Islamic radicalism.

In recent months however, I have begun to question this point of view. I watched a documentary that addressed a side of formation of Israel that I had never known before. I ended up reading at length on the subject and was even called to give a presentation on it during course this past semester. Many of the Palestinians who currently reside in Gaza or the West Bank originally lived in other parts of Israel where they and their families had been for tens, if not hundreds of years. After WWII and the holocaust when it was decided by Western powers that the Jews deserved to have their own state and return to their Biblical homeland, many of the Palestinians were forced out of their property and made to flee to Gaza as refugees. Those who remained among the Jews in other parts of the country did so as an underclass, at first by law. Eventually the law was abolished, but the Palestinians were equal on paper only, still suffering higher unemployment and poorer living conditions than their Jewish counterparts. Currently all of the ten poorest communities in Israel are Palestinian, and 50% of those in poverty are Palestinian, despite the fact that they make up only 20% of the total pop.

I believe that much of the violence committed by Palestinians against the Jews stems from these past and current injustices.

If desperation provides a breeding ground for extremism, which I suspect it does, it becomes less difficult to imagine how the people of Gaza could elect Hamas over the the lame duck Abbas government.

So to wrap all of this up - I guess I would have to say that I don't agree with all of the protesters around the world who are calling on Israel to stop the war... as if Israel stopping it's violence against Hamas will somehow magically end Hamas' violence toward Israel. This approach overlooks the fact that this most recent conflagration was a direct result of Hamas aggression against Israel and that Israel is obligated to defend itself against outside attack, just like any other country in the world.
Neither do I agree with the many of my friends and family who seem to think that the Palestinians are the unequivocal bad guys in the situation and that peace can only come when Israel beats them into submission and they gratefully accept their own pitiful social and economic situation, much of which is a direct result of Israeli abuses in not too distant history.

My own opinion is that Israel must defend itself in this present situation, and should not be condemned for doing so. They must however change their approach toward the Palestinian people, providing wide reaching programs to help them succeed both in and out of Gaza and perhaps even pay damages for past abuses.