Finally, after much pain, trepidation, computer disaster, nit picking manufacturers, and YouTube being stupid and bringing their video cap back down to ten minutes prompting another day of the above mentioned agony, David finished the Garn video, and here it is!

Well, Merry Christmas to all!

We read the Christmas story and gave gifts this morning. I received mainly luggage and a lot of tea, which is good, if you know me.

Last night I read the Christmas story in Mathew and Luke (I set out to read it in all the gospels - only to realize that it's really only in those two....). It's great. I'm always amazed by it.

I was pleased to find that there was still snow on the ground this morning, despite rising temperatures and freezing rain yesterday, but then, we had a lot, so it should take a while to melt under any circumstances.

We have had some really serious snow this year, making it the first in a while. Today I through a sled in the back of my Audi and drove up the road to where the pipeline, which is basically a long path that cuts through the woods and fields and whatever else stands between Big Flats NY and Philadelphia PA. I walked down it for a little ways and found a path jutting out into the woods in a more or less downhill direction. Here is me sledding on it:

The 19th of December

I turned 19 today, on the 19th of December. This morning my Mom took me shopping. I got an Italian language program and a bunch of clothes. We hardly made it home because it was snowing so hard. They say we could get as much as 14 inches today, and we still actually had a little on the ground when it started. Perhaps I will post some more later.

Here is a very corny animated short that I made using blender and the iLife suite. I finished this a couple weeks ago, and was thinking about expanding it. I decided however to just post it like it is and if I do much more it will be as a separate project. Enjoy (the whole 28 seconds of it):

I'm done with school! [for the time being]

I had my last final today! It snowed! And I have a minor caffeine dependency, and my last cup of tea, was early this morning, and there was an algebra final between that last cup of tea and my current position in time and space, so I have been a rather black humor despite being exited about being done.... So you know what? I better go get a cup of tea.

The 3rd 1st Day of Deer Season + The Sky

Well, I did it. I went out while it was still dark and sat in the field below the Inn for about 45 minutes while the sun came up. I heard about a hundred gunshots, some of which ended up uncomfortable in my direction. I saw some deer down at the hill along ways in a horse pasture that belongs to my neighbor (no, they were not horses) but they were a long way off and it was just dark enough that I couldn't really identify if they were buck or doe, so I didn't shoot. And that was much the story of the rest of the day, save for three little doe that I sat and stared at me for a minute or so. They were to small though (I've had this personal rule about not shooting anything that weighs much less than me) so we just stood and stared at each other for a while. The weather was unexpectedly beautiful though. There was still some snow in the fields, but most of the ice had melted making it easier to walk, and it was about 37 degrees, which seemed very warm after the last few weeks here. The sky was amazing pretty much all day long. I took some pictures of it early: 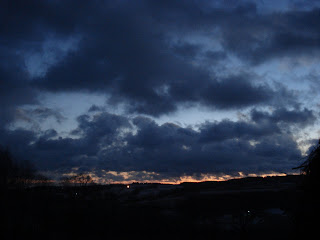 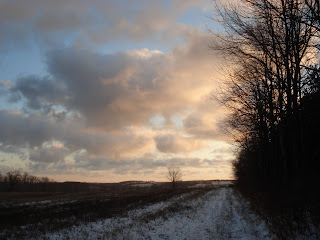 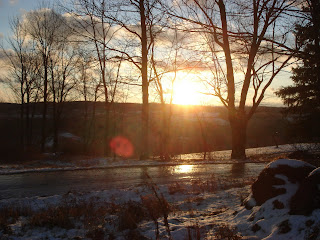 So at quarter after eight I came back, took a quick shower, jumped in the car and drove to school to be a my nine o'clock oral comm class. I worked at the office for most of the rest of the day since my other class was canceled and then headed back to hunt again. So that was the first day of deer season.

I got my new passport today which was awesome and totally beyond my expectations. So now I can go to Italy! (well, actually there are just a few other things to take care of, but that was a major one).
Posted by Andrew at 12/01/2008 08:35:00 PM 2 comments: