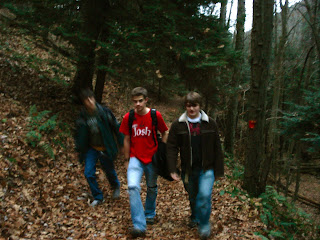 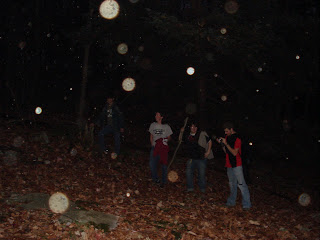 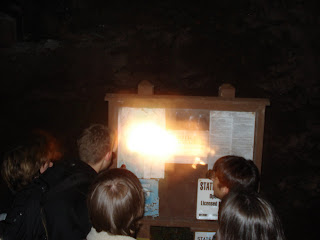 Some rather interesting stuff happened since my last post. The weekend before last I ended up lost on a mountain in Blackwell in the middle of the night.

It was the annual men's night for Navigators you see... and Josh, who is the leader you could say, decided that a really masculine thing to do would be go hiking in Blackwell, which is basically a wilderness about twenty miles from Wellsboro PA, that being the nearest thing that could be called civilization. So around 4:00 PM after a good long drive listening to some strange classic rock that Patrick and Lee liked (not that I should judge, as my musical tastes aren't exactly... shall we say mainstream) we started on up this path that was supposed to lead us along the rim of the mountain ridge and then back down.
It's easy to see why Blackwell was never settled... all the hills and mountains are extremely steep... and to make matters worse the slopes are pock marked with gorges and ravines and in places covered with jagged rocks so that it is almost impossible to walk without danger of twisting an ankle.
We hiked up for about an hour without stopping (aside from John having to pull down a couple of trees) and eventually reached the top. But that was where it got crazy. It was dark and the path of occasional orange marked trees we had been following turned to red... Josh optimistically assumed this meant we were headed back down... little did we all expect, this was in fact another trail... and three hours later, after many frustrated stops to find try and find the way, the trail, wich seemingly led us across the same stream about six times, mostly skirting the edge of gorge where the foot path was only a foot or two wide, we arrived - on the other side of the mountain... eight miles from our cars.
We hiked two miles on the road we came to, before we stopped a hunter who was driving a pickup and took us back to our cars, warning us that what we had just done was extremely stupid. So we went back to Patricks house, and ate hot dogs and watched Ironman, which was a really stupid movie.

This past weekend I went with my club, the Social Science Club that is, to Harrisburg, to see the State Museum of Pennsylvania. It was fun, although it's also a relief to be done with it, as I was appointed treasurer for the club, and had to procure the money for the trip for the college, which wasn't really fun.... Here is William Penn... the dude who started it all: 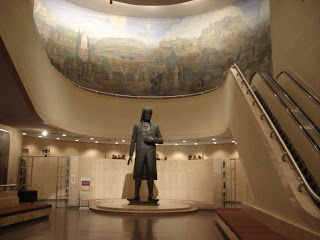 Here is a representation of an old North-Eastern native American pipe bag. Notice the symbol on the front? It's interesting how the swastika, or svastika as it is called depending on which way it is spinning, is considered to be so offensive, when it was really used by many groups other than the Nazis with which it has recently become ubiquitous. It was used by the Native Americans in their art, by early Christians as a symbol of eternity, and is today a prominent symbol in Buddhism. Some analysts have actually been led to believe that possibly the only place it was not used in ancient times was Germany. History is ironic no? 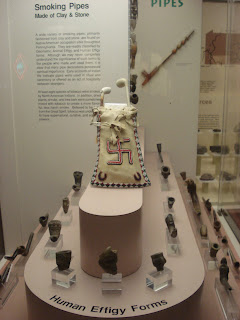 On the dinosaur floor we came upon a sign that said not to through coins in the forest... so ofcourse Bill decided that we had to: 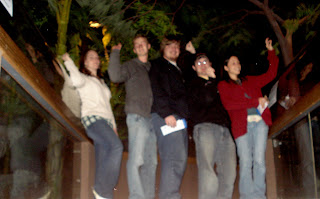 Mungyin, a Sociology major and her friend Lan, both Chinese exchange students who came with us (to think that just ten years ago Sociology was officially illegal in China): 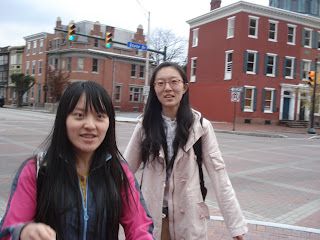 Angie, another Anthropology student and myself in front of the Pennsylvania capital. 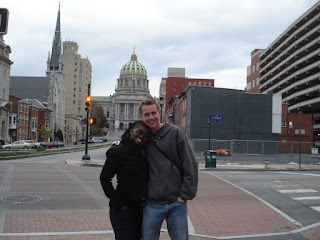 I'm very glad that I'm not reading a newspaper article about several kids who got lost at night on in Blackwell and died.

But I do envy the awesome story you can tell your kids and grandkids. "I got lost in the woods when I was a boy..."
"Woods, what are woods grandpa?"

haha... well... back before the sky turned brown, even before WWIII and the first alien invasion... there were these giant plants. Sometimes they were over a hundred feet tall and they were made out of a dense organic tissue that hardened into a material called wood that we often used to build houses and things. They gained energy by deploying green photosynthetic elements all over their tops... during the fall (this was back when we still had seasons you see) they would turn bright colors and then fall off.

*giggles*
very funny
/scary (I won't dwell on that though)
=D

Glad your'e still alive and well... unless something else has happened. :P

Very very interesting about the ... symbol i can't spell...

Anthropology is getting more and more interesting to me, I have a friend down here who is majoring in it and there are lots and lots of conversations that stem from it.

Relax, we have so many radical hippies and tree huggers that the forests will never be completely gone.

How was iron man that bad??

What an adventure! Glad you guys made it back ok!
:)
Thanks for the pics of the museum - I haven't been there for many many years. I think it is time for me to take my kids there again. Somehow I think it will go better than the last time when I needed to take a huge stroller... ;)