Well, it's finished. Or in a way just beginning. Obama was elected - and the country is going to change. I doubt it will be nearly as dramatic as most of his chief promoters or detractors claim, but it will. It's scary in some ways. He stands for some things that I am against (and I think most of you who read this also). On the other hand though, it's kind of exiting. After all... it has been eight years of rule by one party. And an African American President! Who would have thought so soon? Also, I think this was the most involved elections I have ever seen... and I believe it is correct to say, the most voted-in in recent history. And I think that is good. People being involved in government is good... they have spoken... and perhaps America has decided it's ready for a little bit of socialism....

I took this picture today in Mansfield. These guys were redoing a war memorial in a prominent location in town that has been the same for as long as I can remember it. It happened to be right next to the polling station. I thought it was rather descriptive of the whole day. 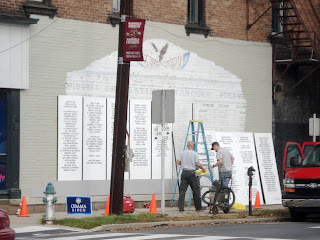 McCain's concession speech was good wasn't it? I think I actually grew to like him a bit in the last couple of weeks. He seemed to be more animated and genuine... pity that things turned out the way they did... in recent history and older history also.
Posted by Andrew at 11/04/2008 11:36:00 PM

Oh, I read in the Penny Saver or somewhere that they were planning on re-doing that.
Snazzy.

At the Sign Shop that is... where they made the thing.

Haha, the penny saver. Like from Juno. Er, never mind.

I am very... nervous. Partial birth abortion is coming back.

I hope he wasn't lying when I heard him say that he was against that.

it shouldn't be an issue- that he is African-American. his race shouldn't matter one way or the other.

I agree- it would be as drastic a change it is sometimes appears. He may want a lot of big changes- but all those tings still need to get voted for by all of us. We'll see.
It was a VERY INVOLVED election year. Even the youth were very interested- which is good.