Social Stratification and Poverty Today In the U.S. 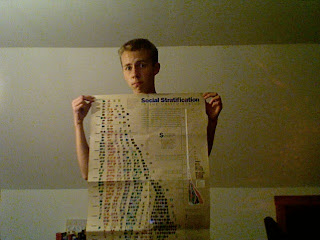 The American Profile Poster paints a picture of U.S. Society as a steeply tapered pyramid with the bulk of the population sitting in the lower and middle regions below $60,000 dollars income and becoming narrower from there on up with the final grouping (were it possible to include) consisting of only a few individuals and being more than three stories high! One primary factor in this stratification is occupation. While Administrative and professional jobs are fairly well distributed throughout the different income levels, they become disproportionately dense at the highest bracket. The mid levels are composed rather evenly of professional, clerical and blue-collar workers. In the lower area, under $30,000, we begin to see the administrative jobs all but disappear, the body of the chart now swelling with unskilled blue-collar workers and retired individuals. The lowest level is composed largely of the jobless living on public assistance along with some unskilled-blue collar workers and retirees. At this bottom level we see Africans and ethnic minorities over-represented, bringing race into the equation. People down here are also predominately single, often with dependents."

Today, is (just barely) Oct. 15, which means it is Blog Action Team Day. This year the subject is poverty. For a Sociology class I'm taking I just completed an assignment in which I had to analyze The American Profile Poster by Stephen J. Rose and Dennis Livingston. It is a graphical display of the Social Stratification (how much money is made by how many people and how does it affect how they see themselves and each other) in the United States. It was a short assignment, only about a paragraph, but could have easily been a book (and in fact has been... several books). What it shows is rather sad. That although there are some really wealthy people in our country, there are even more living in abject poverty. So anyhow... I always sign up to do this Blog Action Team thing... but I thought that since I was just doing this to night, and this year is poverty, I would post it up hear.

So, thanks for taking the time to read : )

Jed Estrada said...
This comment has been removed by the author.
12:16 AM

lol, it gets me going too, you should see some of my other posts ; )

That statistic is pretty accurate. There was actually less inequality in our country, and it was going down, but then somewhere in the sixties or seventies the trend changed for some reason, and now it's actually growing.

I didn't know you wright for a newspaper. That's awesome!

Yes, I do *write for a newspaper. (that's so lame that both of us spelled that wrong:-p) All my articles are published on my blog. How about you? What are you doing these days?

Well... I'm going to school at Mansfield right now. I work a little bit at my Dads business. I've been on fall break the last two days + I had a little cold, so I haven't been up to much.

Is that an article or a book? Would be something a 15 yr old could read and not be overwhelmed?

Gavin is just starting to research/learn about economic systems. (which means I am too as all that 'politic stuff' never was my cup of tea)

interesting change in statistics (in Jed's comment) and all that 'not really there money' always confused me. how can people have money/wealth that doesn't exist. Like all those imaginary numbers in high school math.