This past weekend my family went to Lake Placid again. I stayed behind this time, first because I had an unnerving amount of homework to do, second, because it has been a few years since I really enjoyed traveling with my whole family that much... so it was just Lamont and I. He is my sisters pet fish. He is Chinese, but she is into French things, thus his name. There is also Bella, our dog that the Slacks left us, who somehow ended up living with me, I being the only one who hadn't been in favor or adopting her from our neighbors in the first place. She was formerly Baily, but my sisters decided it was to masculine and changed it to Bella... which is also French. Then there is Mansie... the cat, who was formerly Tansie, but my sisters decided that was too feminine... so they changed it too. 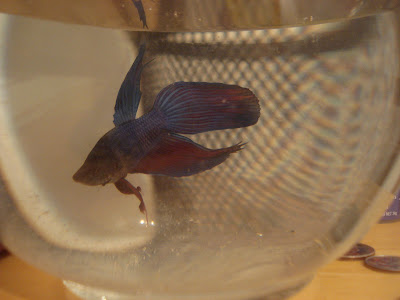 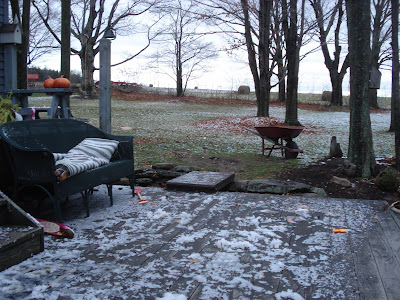 We have a little snow on the ground (above).
I went up with Derrick from work to a football game in Corning. I ended up hanging out with some old friends from our church that we used to go too. Most of them I hadn't talked to since then... so it was good catch up.

Saturday my Grandma and Grandpa invited me down for supper since my parents were gone. I talked with them about my going to Italy and all that. It's moving forward pretty well now... I got my paperwork. I'm going to get my medical stuff together tomorrow and my parents are looking into the plane tickets and all that. Hopefully I will be able to get a new passport... it's not expired, but I look like a different person than the picture on it (I had hair over my eyes and down to my shoulders back then). I still haven't told to many people at Mansfield... except for my adviser, as I had to explain why I won't be registering for any courses for next semester. He was really cool about it once I explained. He had actually been through the town where I'm going before (he's a cultural anthropologist like I would like to be someday, and he's been all over the world). I still haven't told the people in the Social Science Club, which is going to be hard, as I'm their treasurer. So I'm waiting for a good opportunity to do that. We will hopefully be going on a trip to a Museum in Harrisburg in a few weeks. I'm in charge of orchestrating all the funding and paperwork. That has been (and will continue to be) a little adventure in bureaucracy... hopefully it will all come together.

So back to my Grandparents. After Italy, and eating, the conversation drifted as it usually does to politics. They are very adamant McCain supporters, which always vexes me because of my Grandpas unhappy history with McCain in Vietnam (google Walter Wilber and John McCain if you care to find out)... you know, I just realized this is going to be too big a subject of confine to the end of this post. I will have to do another one devoted to it....

I'm surprised that you're irked by your Grandfather's political standings... I think it shows that he is forgiving.

It's very important to pick a candidate that supports Biblical values, (e.g., pro-life, upholds only the union of a man and a woman as God intended...) because, unless I'm mistaken, the President chooses the judge of the supreme court. Considering all this, it seems that your grandfather was able to put his own hurt behind for the profit of everybody.

I agree that he is very forgiving. He forgave his Vietnamese captors, which I think is one of the reasons McCain and some of the other vets hated him.

I believe very much in Biblical values. I'm pretty sure that the Bible has some bad things to say about lying and slander.

I agree with "anonymous" - though I also understand where you are coming from. Perhaps the perspective on my latest blog post would help?
In my opinion, voting for Obama is not an option...and a write-in is not doing anyone good - you may as well not vote...and not voting is taking for granted the fact that we do still indeed have the FREEDOM to vote.
*sigh*
I don't know. But I do know that I give your grandfather props for being so forgiving.

sounds like a relaxing time. Those poor animals will have identity complexes and need counselling with all those name changes...