Well... finals are almost over. It's hard to believe really. I had one on Monday, in Anthropology, for which I got togeth 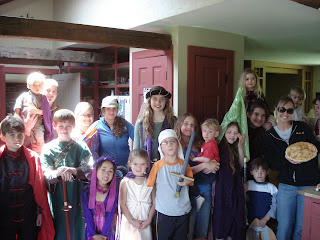 er with Abby and Tiffany for in North Hall which was fun. I ate lunch with Tiff afterwards and ended up talking with her for almost an hour and a half about bad vacation/traveling experiences like families getting sick on the road and almost getting drowned and car accidents and that sort of thing. It turns out she is going to Ocean City this summer with her boyfriend who showed up, which I felt was just a little awkward... but they both seemed OK. On Tuesday I didn't have anything, so I stayed home and took pictures for my families Medieval Pie (a homeschool event they have every year; it's actually supposed to be a feast, but no one was feeling that motivated this year).

Today I had two finals in Micro-Computers and General Biology. They both went well... much better than I had expected actually (I shouldn't say that as I don't know yet - but I had a good feeling). And it looks as if I may actually get my tutoring compensation in the form of an iPod in the end. I only have one left in Sociology. I was able to get Dr. Madigan my essay finally. He was happy when he saw it. It was six pages long and he said it was the longest anyone had done or that question yet. It was supposed to basically sum up what you had learned in the course though, so I thought it had better not be to shabby. I hope he likes it, and doesn't think it's too preachy or philosophical. 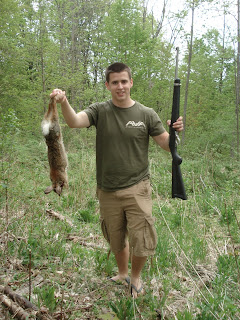 This evening after supper I went woodchuck hunting. I saw one on my Grandpa's rock pile, but missed it. Then I saw my cousin Chris, who also had a gun, and heard my shot and came over. We went out in the field together and saw another one. We must have fired ten or fifteen shots at it, but we were aways away and he kept bobbing up and down in his hole. Then I shot and he seemed to stop moving, so we were exited and ran over, but then he popped back down in his hole and we were unable to find any sign that we had hit him at all. So we weren't to happy about that... but it was still fun. After that we went down in the woods below my house and Chris shot a rabbit. I don't kill them my self actually, but I don't really care if other people do so I got this picture of him with it.
Posted by Andrew at 5/07/2008 07:58:00 PM