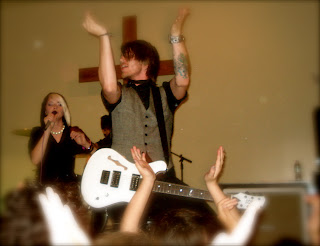 Last night I went to a Fireflight concert at a Church in Mansfield. I had never heard them before other than watching their music videos at my friends house, and honestly they aren't really my style of music, but that said, they were very good and I had a good time. There weren't that many people there unfortunately (less than a hundred probably), and it felt almost like a private concert or something. The good thing was I was to get up really close, which was fun. They were really cool too. After the show they all came down to autograph things and I bought an album and had them sign it, and I ended up talking to their bassist a little and she was really nice.

This Morning we had Church at the Cornfields and did worship acapella because none of our mus had been able to plan for anything else but that was cool. We did a study... or discussion really, out of Acts, on the subject of Stephen's Sermon and consequent stoning. That was interesting.

That's about all I can think of... other than I got new strings on my bass. They are smooth-wound which gives them a slightly mellower tone with less fret noise (not to mention they are a bit easier on the fingers) I bought some new strings for my acoustic guitar and put them on myself. They are elixirs, phosphor-bronze wound, which is the same kind I usually get, only these are supposed to last longer - and the better - as they were about five dollars more expensive. So new strings make me kind of happy since I play so much.

that's neat. I wanted steel strings on my classical guitar for a long time, and my friend put them on for my birthday, but the top started to crack and the bridge started to lift (EEEEK!) so I had to loosen them. And now I'm looking for a new acoustic. Any suggestions as to which brand is good, but not too pricy? We're talking baby sitter's price range here.


Your church study sounds exactly like ours was. We're using a video series now, which is really neat.

Yes... steal strings are hard on instruments (and fingers!). I've been reasonably happy with mine, which is a Hohner. The nicest acoustic guitar out there hands down is a Taylor... but they are so ridiculously expensive that I will never buy one.

If I were in the market right now, I would definitely check out Takamine. I've played one and I loved it and I think they are under five hundred dollars (or even less)

you know what really stinks? I'm teaching one of my bro's friends some guitar, and he got a nice, relatively inexpensive Taylor. That thing is such a dream to play, considering its price (it's only $300 on musician'sfriend.com) but alas, he beat me to it.

thanks for the recommendations.