I went to the New York Farm Show at the New York State Fair Grounds in Syracuse this Saturday. It brought back memories from last year as we were in the same booth. The booth was much bigger this year however, and we had another one at a different location. We also has several guys out from Greenwood as well as most of the ThisWarmHouse employees. My Dad and brother were there for Thursday and Friday, and I was there Saturday, which is also like last year, although I don't think Isaac went up at all then. It was very successful. We sold four Greenwoods and a giant Garn System. We even had one of the big Pelco Biomass Units there, which looks more like a silo than a stove. Here are some photos of the event:
Our main booth: 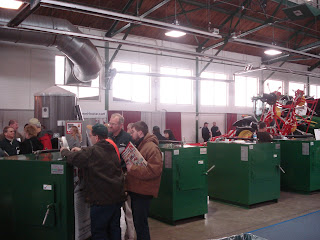 By the end of the day I think this is what we all felt like: 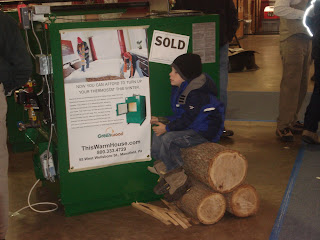 These girls certainly did. I happened to look over and saw this and thought it was cute: 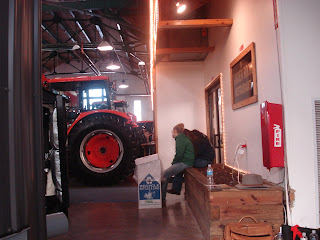 Here is outside the fairgrounds... this part of Syracuse used to be a junkyard, and largely still is. Now they want to turn the whole place into this environmental Mecca and have this big program that you can see if you go to the mall there... if your going to dream, I guess you might as well dream big: 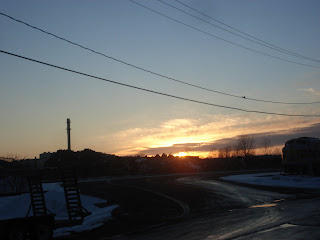 On the way back my Dad and I drove through Ithaca. We went through Cornell, which is huge, and rich looking... and then we ate at a Mexican Restaurant that we really like on the commons. It's really cool... interestingly they don't have the bathrooms segregated by gender... but I guess that's Ithaca for you.... = )
- Andrew 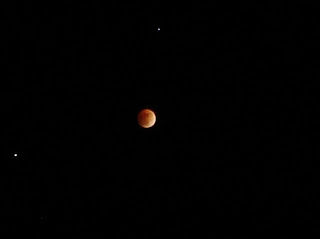 Here is a picture I took of the lunar eclipse last night. My Mom and sisters were watching it through the window, and when I went out late to do the fire, It looked so good that I decided to try and photograph it. It kept blurring so finally I got a tripod that Mr. Slack gave me when they moved, set it up, switched my camera to the highest resolution and then cropped in really close. This is the best one I got, you can even see Venus and this other bright star that on CNN it said: "made cameo appearances throughout the night". Speaking of CNN, I tried to send them my photo, because they were asking for people to upload them to their site. But for some reason, their uploader makes both of the browsers I tried it on crash. Today they have a slide show of pictures people have sent it, and this one is better than a lot of them, but oh well... it's their loss I suppose... ; ) jstkd.
Andrew
Posted by Andrew at 2/21/2008 03:35:00 PM 3 comments:

Syracuse was fun, although I'm getting a cold, which isn't fun. We went to the Apple store, and wow, if I didn't have any other priorities for my money...! As it was however, I only purchased one thing, a World of Warcraft game. Now I'm not to happy though, because I know that Warcraft is mostly online, but I assumed that it would have some sort of campaign or something that I could use without having to by a subscription... but noooooooooooo... you have to buy a subscription... which isn't really something I want to do,  because first, it's complicated, and second, it's on a per month basis, so I think I would probably have to play quite a bit to feel like I was getting my monies worth, and I don't have time to play nearly that much... so I'm feeling kind of ripped off about that right now... maybe I'll just wait to play it until spring vacation or something. I don't know. At least it wasn't that expensive. I looked at getting some other programs like photo shop and stuff, but they were all really expensive, like in the realm of near a hundred dollars, and I really struggle with the idea of paying that much for software.
On the way back we ate at the new Moe's that they just put in in Ithaca, which was good. And now I'm extremely tired... probably partly from my cold, and partly from not getting enough sleep... so I must end my post here..
Posted by Andrew at 2/09/2008 06:59:00 PM 2 comments:

We are going to a Mac Store!!!

This past week went pretty well over all. I had my first real set of exams in Biology 1101, Intro to Soc, and Intro to Anthro. I only have the results back from Soc so far. I guess it is a tough class, because I got an 88, and as it turned out, that was the second highest score in the whole class of almost fifty people! On Monday I ate squid in that class (don't ask). I had another crazy experience losing work for my micro computing class. I've had bad luck with that so far... but I was able to redo it without to much trouble. Anthropology was fun on Wednesday because Dr. Molla brought this Melanin testing device into the class. I was one of the volunteers and mine is 34.8, which I guess means I'm pretty white, though two of the girls who did it had even lower counts than me.

I'm afraid that class may be about to get interesting, perhaps in an unpleasant way, because, being a Christian and a creationist (which I know is apparently out of line with being an Anthropology major) I had intended to to keep a low profile and just answer what I needed to. I believe in challenging the accepted darwinian theory, but, when your such a minority in an area that is so owned by evolutionists, you have to pick your battles, and raising my hand to object every time a professor mentions monkeys, or a date before 10,000 BC isn't really something that I have the energy to do. So that was my game plan... lay low, suck it up, and get through this first semester at least. But today, this guy at the other side of the room started to challenge Dr. Molla on some issue regarding the origins of language. He didn't say it, but from how he put the question, I was immediately suspicious that he was like me; a creationist. I stuck around after class and he went and talked to Dr. Molla again. He was upset that he had was teaching linguistic evolution without saying that it was only a theory. After this I told him I agreed with him, although I that was all I had time to say. So now I'm in a bit of a quandary. I knew what I was getting into with this whole Anthropology thing. My Dad minored in it in college, and I have been fascinated by creationism and evolutionism since I was a little kid, so I figured I could handle it. But this is something I hadn't counted on. I don't want to pick a side and get involved in a war, especially before I've proven myself at all (and I don't believe I mentioned before, Dr. Molla happens to be my Advisor, so he's the last person I need a fight with!). But if this other guy is standing up for what I believe in, how can I possibly let him go it alone? So that's it. If you wanted to pray for me that would be fine. One thing is for certain, I'm going to get to know this other guy.
Posted by Andrew at 2/08/2008 10:47:00 PM 2 comments:

It's friday. Morning and I'm at home. Why am I at home? Because we are having a huge ice/wind storm.
I "overslept" this morning, because somehow either my alarm went off and I turned it off without knowing it, or my alarm didn't go off at all, which is plausible as my Mom later said that she never heard anything. At any rate, my Mom woke me up at about 8:20, and I was set to run out into the blizzard, which I was at this point still oblivious of, without any breakfast, to get to my first class which is at nine, when when my Mom suggested that I check online to see if it was canceled. So I did, and sure enough, it was, in fact, all classes are canceled today. So, as it turned out, I didn't oversleep. I was actually kind of disappointed for some reason... maybe just that I spent all yesterday getting assignments ready and I wanted to submit them.
Yesterday I had the worst time with computers! It was thursday, which is my day off from classes, and consequently, my day on work. So I was over at ThisWarmHouse in Mansfield, and I had brought along this micro computing assignment from college where we had to do some stuff with binary code and spread sheets (everybody told me how it was stupid that I had to take micro computing and that I would already know everything - well all those people took it about twenty years ago - and guess what, it has changed!). So I plugged my flash drive with the files on it into one of the workstations at my Dads office, and first was met with a disappointment when I found that I had saved it wrong off of my Mac, so the PC was just reading it like picture. Thus, I had to start all over again. It took a couple of hours because I was working too, and several customers came in. Finally, I was almost finished, and after one of the very last steps, there was this big POP! And the computer died. Just died. Turned off. No freeze, no error message, just went stone dead. So I lost it all!
Say, here is a joke I learned from my Micro Computing Professor:
"There are 10 kinds of people in the world: those who understand binary, and those who don't."
My craziest class so far has been sociology, by virtue of the Professor, Dr. Madigan. He is a very, shall we say eccentric character. He is a Sociologist (obviously) but he is also the Harmonica player in an Irish Band... a rather rowdy Irish band. He is in fact Irish. He spends much of his time in China though, because he teaches there, and his wife is Taiwanese. So this past Wednesday, he opened class by play music from his band, and then playing the harmonica with it! And now, in our next class (which was going to be today) he is going to bring all of this authentic Chinese food and dare everyone to eat it... so yeah... Dr. Madigan.
Here is a Dr. Madigan joke: "I once saw in Irish man walk out of a pub...."
I didn't get it for a while.
Anthropology is also interesting with Dr. Molla, although he isn't quite as crazy as Dr. Madigan, he is always coming up with examples to illustrate points that I think would make more sense to someone from Bangladesh or India (I'm not really clear on where he is from, but it's one of those two). It's kind of ironic really, Cultural Anthropology, the class that teaches about other cultures, and our Professor is in fact from another culture. I guess it's a good lesson in being culturally relativistic instead of ethnocentric (as they would say in anthropology) ; )
- Andrew
Posted by Andrew at 2/01/2008 09:18:00 AM 3 comments: