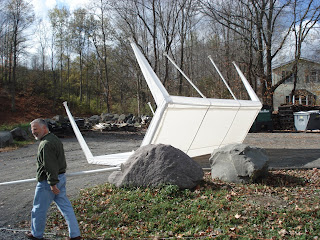 So yesterday, I was at work, and I looked outside, and low and behold, the 10' by 20' tent that we keep set up on our lot to park the skid-steer under was upside down! And stranger still, it was on the other side of the lot, and was undamaged, which means that as there is a barrier of large boulders in between the two sides ( to keep truckers using our lot to turn around) it must have moved all the way, at an altitude of at least three feet or so above the ground! So, it must have been the wind... but the other thing is, there was no wind to speak of that day... so it must have been a freak gust that blew up - that or some bazaar prank, that was carried out in only a few seconds, while we weren't looking out the front of the store.
Today was crazy at the store, and to make it worse, my dad and two of our employees were attending a bunch of meetings in Corning. So it was just Mr. Slack, Marty and myself to handle all of it. 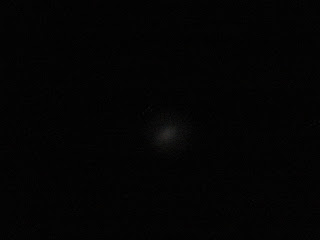 This evening we just got back from going to an Astronomy club that meets over on Mount Pisga, a big wild life preserve with a lake, and hardly anyone around for miles. It was awesome! The sky was so clear! And they had this huge telescope. The meeting had been called on a spur of the moment notice, because a comet, the Holmes (which I can only assume was named after you sherlock!) which they had been tracking all over the country for several days had under gone some sort of unexpected anomaly that that made it over a hundred times brighter! So, due to the short notice, it the only other people there were the old people that run the club, so we all got to spend lots of time looking through the telescope. Above is a rather faint picture that is the best I could do with my camera looking through the telescope lens, but if you consider that it was surrounded by stars when you actually looked at it, and they don't even show up in the photo, you can begin to imagine how bright it actually looked in real life. 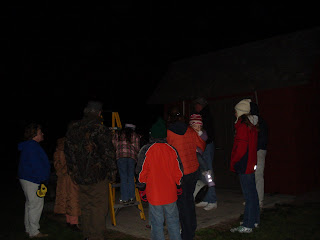 Here is the one group photo I took, scaring the heck out of everyone with the flash : )

all for now,
God bless,

PS, if your interested in learning more about Holmes and seeing some better pictures, follow this link: http://cometography.com/pcomets/017p.html
Posted by Andrew at 11/02/2007 10:03:00 PM

Yes! I remember way back when they asked to name that comet after me... They were going to name one after Watson too, but who cares about him?? Speaking of watson, could you pass him a message for me?: "Check your stinkin emaila already"

Everyone should be intrested in Holmes. He's a wonderful person... er, comet....

yeah... sorry I forgot to tell Jordan that... I actually saw him for the first time in a while a couple of days ago... but I forgot all about it.