This past Sunday Mattea and I drove up to the Efthimiou's house. We were told that we were going to do paintball, but when we arrived, they told us they had just decided to do family pictures... so we went along with them, and I was starting to feel rather awkward at this point because they had all dressed up for the occasion, and I, who had been told, twice, that we were doing paintball, had dressed accordingly. Which is to say, old cloths that didn't match. So at any rate, we did eventual get done with that, and I think they got some really nice pictures (they had better have). 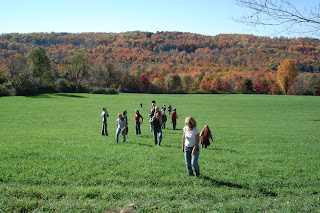 Finally, we did actually do paintball, and the Roberts (well, some of them, Anna and Pat) came, which was fun. Unfortunately, the 9v in my gun gave out and, after 'killing' only one person, I had to drive into South Corning and buy a new one (only a few minutes away). 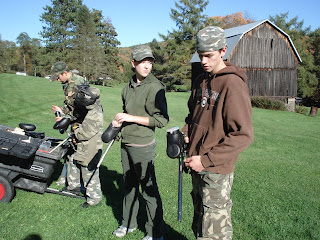 Here (above) are Anna and Pat - looking very warlike I might add. 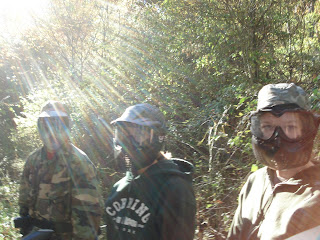 And here, left to right are Daniel, Delian, and Anna, looking strangely like something from Halo, or at least that's what my Mom thought.

The game went pretty well, except for Rachael, Cory, and a bunch of other people getting out, and then coming back, without telling anyone. The last time that this happened I almost get hurt, because we were all standing around the main bunker, and thought everyone was done, and thus had even taken our masks off, when someone who shall remain nameless started barraging the entire area. I got hit right was facing it, and got hit on top of the head. Just a four inches lower and it could have been bad. But, it didn't, so I survived = )

Hiya my friend. Can you tell me if jordan either died or lost internet or just has Xanga???

haha, I don't know, I haven't seen him in a while, but I'm pretty sure he's not dead and hasn't lost internet : )