Well, Manitoba was an experience, particularly since we drove... twenty four hours up, spent twenty four hours there and twenty four hours back. Mr. Kimball and my dad drove mostly, although I did while they worked on the business plan on the way up. We went through New York, Pennsylvania, Ohio, Indian, Illinois, Wisconsin, Minnesota, North Dakota, crossed the border (which was an ordeal... normally, you just drive up to the window and show them your ID, but they actually made us park, and come inside and wait. Then they questioned us all together, and then they interrogated Mr. Kimball and my Dad alone (I think I mainly had to do with that they didn't have pass ports and I did). Finally they let us through, and we drove through Manitoba.

We met up with the Greenwood Tech people in Winnipeg, the capital of Manitoba and we all stayed together in a hotel, ironically enough called, The Greenwood While there we ate one of only two real meals that we had on the entire trip (in Mr. Kimball's words: "We lived off of leaves, twigs and pumpkin seeds.") Interestingly enough, I actually ate it illegally, as in Manitoba, they have different laws about drinking, you see, the minimum age is lower, but until you are that old (which I'm not), you are not allowed to even be in a restaurant in which they serve alcohol, which they did, and I was... so I didn't know this all until after I had eaten there, when our waitress inquired as much, but at that point it was too late... so yeah... at least it was in another country = ) After nine and a half hours of sleep (I needed every one as I only slept about four hours a night the night before and fours hours the next, and that only in little naps) and the next morning we all ate breakfast - in the non alcoholic section - and set off to Arborg to see Pro-Fab industries. We got checked in at the factory and attended a seminar on the Pelco, the new bio-mass unit we are going to be selling, and it's huge! We also toured the factory which was lots of fun, and I got to actually see a Greenwood being made.

All said, it was a good trip, I learned a lot and got to go to Canada and there were know major problems, even if the scenery was less than impressive. Well, actually it was impressive, in it's bleakness. I tell you, if I had to describe it in three words, they would be: cold, gray, flat. Now, I'm sure that it looks much better in the summer, but now it looks something like our area does around February, minus the snow, and the hills. It was flat. My goodness it was flat! And the trees were all stunted. You could see forever, which only made it worse, because things like telephone poles, electric lines, cell phone towers, not to mention the huge grain towers that rose for the endless grid, could all be seen at the same time and I doubt there was a place in the whole area where you couldn't stop and count at least several hundred such man made obelisks which gave the whole place a harsh, industrial feel. And the sky was dark and overcast the whole time. Oddly though, it seemed an appropriate setting as it added a slight sense of menace and impending doom (I shutter to think what it might be like in a few months) and watching everyone at the factory bustle around and seeing the truck drivers, in their blaze orange, thermal jump suites loading dozens of units on to their semis preparing to leave, my Dad and I both thought: where could a better place to build stoves be than were your life so obviously would depend on the ability to keep warm?

Hear are some pictures from the trip: 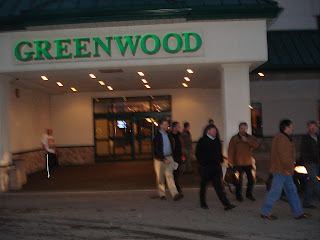 The leaving the Greenwood Inn, Winnipeg, early in the morning. 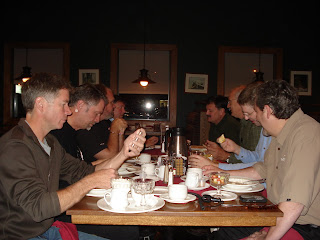 Breakfast with the Greenwood people. 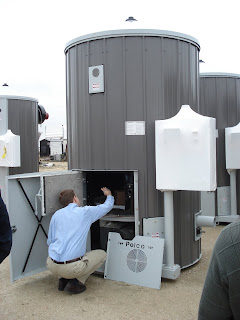 Doug photographing the Pelco . Can you believe that's the small one? 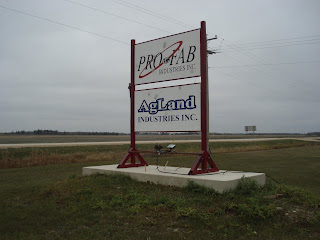 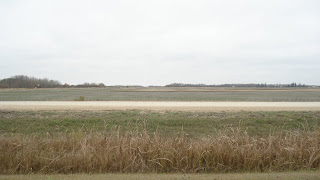 The Endless Steppe (the view right out front of the building)

Accurate depiction of the 72 hr Manitoba run Andrew! ... maybe we will charter planes for these quick trips (to make them real fast) with ongoining successes - but this sure was a memory... Thanks! - Dad

hahaha, that would be a great idea.