Below: Josh and Steven do the potato sack race. 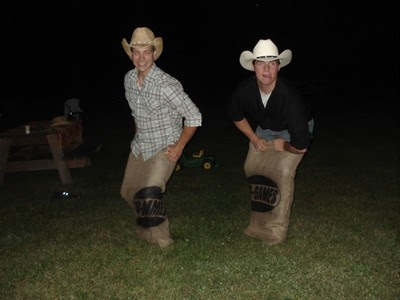 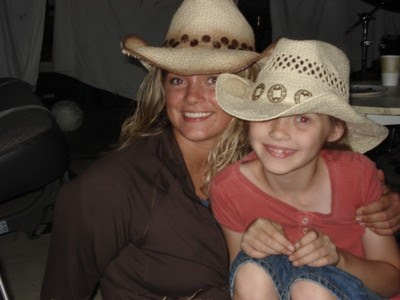 Derick plays with the horsey. 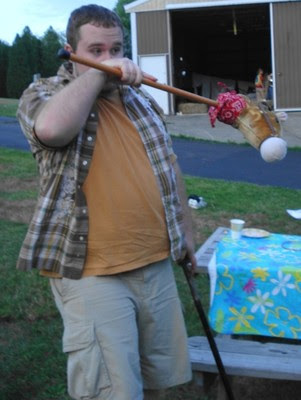 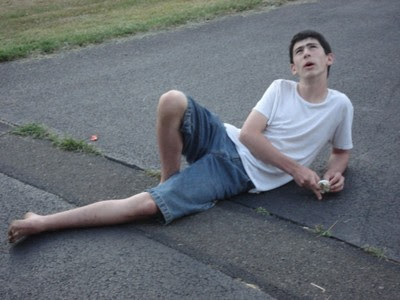 I'm in wiliamsport with my Dad right now. And Im in the car and am posting, which is only possible because of his iPhone that he just got for
business (but who said I couldn't blog with it on long business trips) Its pretty much the coolest thing ever : )

Email ThisBlogThis!Share to TwitterShare to FacebookShare to Pinterest
Labels: iPhone

We had a car wash for church this past Saturday and it went well, although it was different without the Cornfields or Efthimious. I saw the Woody's for the second time since they arrived here and we are having them over tomorrow. 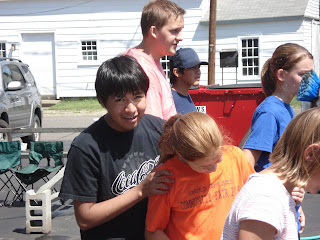 In Church I had to play acoustic guitar at the last minute because Gen, our pianist was gone and there was know one to replace her and we needed something to fill in. It was interesting because that's not the instrument I'm used to playing, but it went alright and Mr. Slack did a good job leading. And I got some positive feed back afterwords, which is rare = ) And Pam Norris, a lady who goes to our church, saw a bird on the outside window near the doors and coaxed it on to her hand and held it for nearly ten minutes, which is something I've never seen someone do before in real life . 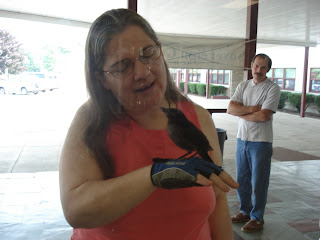 I got my scores back from my Advanced Placement World History Exam I took this Spring and I got a five (out of five), which was really great and I was very happy about since it's the highest ranking you can get.

I went berry picking this evening, but there weren't many. Seems to be too dry as many of the berries were small and shriveled, still, I get some good raspberries. 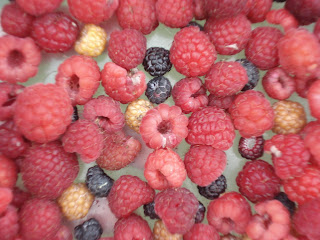 I guess that's about it, except that I saw the Petersons yesterday while they were at the Slacks. I talked to Josh about politics inside since he was working on a paper for college. Steven and Jordan went out hunting twice. Here is a photograph of them with all of the game they killed: 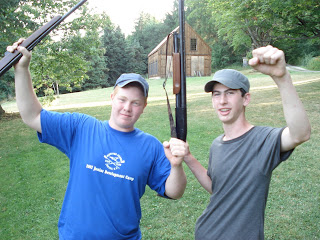 Tonight we are having a Party for Misha's 7th birthday with both sets of grandparents, my Uncle Phil and his wife, whom I haven't seen in many years and, of course, the Slacks.

Sanna came upstairs this morning and woke me up at 7:20, which I thought was annoying because I had my alarm set for 7:30, since I new I was leaving for work at 8:00. But when I get downstairs I realized, oh yeah, it's Misha's Birthday. So I was still annoyed, but not as much.

Then I went to work with Dad as I do just about everyday now. I sorted receipts, pulled weeds outside (not so much because it needed it, which it did, but because I was tired of being stuck inside all day) and answered the phone. Yesterday the funniest thing happened, twice. I picked up the phone, and answered as I always do: "Hello, This Warm House. Andrew speaking!" Notice, I said Andrew speaking. So that morning a guy called and I said that and the first thing he said after I said that was "Oh high David, I talked with you a little while ago about..." He thought I was Mr. Polczienski, after I said "this is Andrew"! I thought this was funny, but didn't say anything about it. Then, that afternoon, I took another call, and answered as usual. And what does the guy say but: "Uh hi. Is this Matt?" He said, that, after I said "Andrew speaking"! So at this point I was starting to crack up, and when the guys heard me say "Hello This Warm House. Andrew Speaking.... uh, know, this is Andrew actually." They started to crack up to and it was all I could do to say "I'll get Matt for you" and press HOLD, before I completely lost it. = )

This afternoon my Dad and I went to Walmart and I got Misha some sunglasses, that are her size and style (she keeps on borrowing mine, which is kind of strange).

After I got home I dragged this huge and extremely heavy Audio cabinet that Todd gave me because it get smashed in some sort of accident, but only one speaker is damaged he said if I thought I could fix it I could have it. OK, that was long, let me reiterate: I dragged this thing out of the car, into the garage and up the stairs to where I'm going to work on it. It's really hot in there and after that i was about fried, so I went swimming with the Slacks and everyone. And I finally found my swimsuit!

And the Woody's got in last evening and I so look forward to seeing them! It's awesome!

We are getting ready to cook out, and I'm hungry so I'm going to stop now.

It's been a rather busy time since my last post. My whole family traveled to West Virginia and back in two days. My Dad you see had a stove to deliver, and since it was my parents anniversary, he decided to bring us all. We saw a whole bunch of mountains, trees, and depressed mining towns and I bought a finger piano = ) And they have craziest winding roads on which when you take a turn, it feels like your going to fly off, and all these "switch backs" and my Dad and I were driving on these little roads with our big Excursion and trailer. It was fun.

The Key of H had a concert for Delian's Birthday and it was fun. Especially thanks to Mr. P and Jesse who got our sound system worked out.

The night after I got back from WV I went up to the Rawliegh's and went to see Transformers, which I would not particularly recommend.... But PJ and Alex and Mr. Rawliegh and Mr. St. Clair and one of his Friends were there, so it was fun.

This afternoon we went to my Gramma Nancy and Papa T's house in Troy for lunch and then watched a Parade for the troops in Iraq. 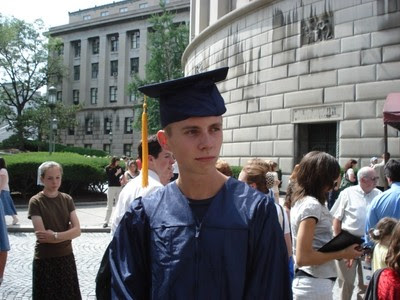 I graduated from PHAA yesterday in Harrisburg. It was a great ceremony and everything went really well, despite the fact that the only rehersal was five minutes of direction as to how we were supposed to do everything. It was a really big class (74 graduates) and all fo there friends and family were there. Fortunately the Forum is really big though. And out of 74 graduates, I was 74th, due to the fact that my last name is a W, which was kind of creepy, especialy when it came to the part where I came up on stage from one side and my parents were supposed to come up the other and give me my diploma. You see, my Mom had been out looking for Sanna, and my Dad has been looking for my Mom, so I finally got up to the steps of the stage, after 73 other graduates and my family wasn't anywhere to be seen, and I thought, "Oh great, I'm the last one and everyone is ready to be done and throw their hats and all that and I'm just going to end up standing there holding everything up." But fortunately, at the last minute my Mom and Dad came in and I came onto the stage from one side and my whole family came up from the other, and nobody was any wiser for it = )

And thank you to the Slacks for attending along with my Grandparents to support me!

Here are some photos from the day:

The guys from my area afterwords with our evaluator (see previous post) minus the one girl Sarah: 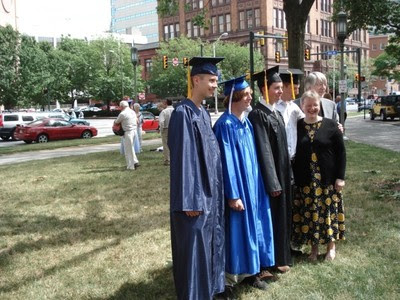 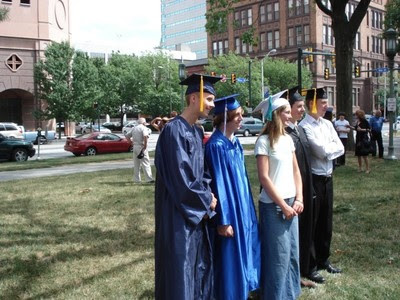 With my evaluator, Dawn: 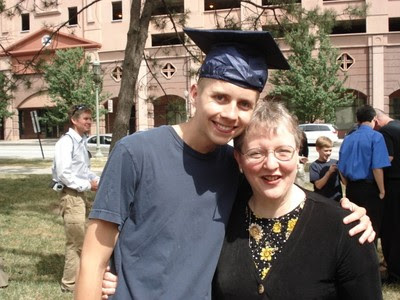 With Misha, whom everyone thought was really cute on stage (the whole auditorium went "awww" when she came over and hugged my leg ; ) 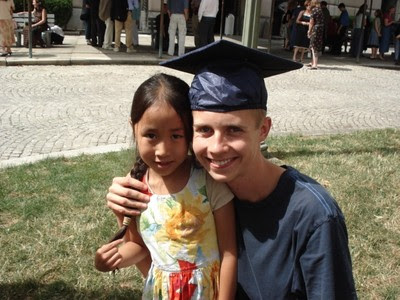 A rather blurry picture of my class in the Forum 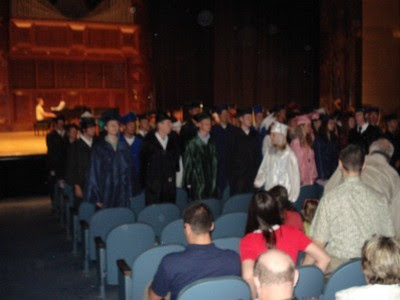