I officially graduate tomorrow! Since I've been enrolled in the PHAA diploma program for my entire time in high school, I get a Pennsylvania High school Diploma, which is stupendous, because in many states, home educators can't get actual diplomas, so I'm pretty exited about that. The ceremony is going to be held in Harrisburg at the forum behind the capital building (that's almost what I'm most exited about because Pennsylvania has the coolest capital building ever, although the contractors in 1905 charged the state about five times what it was worth, but that's a long story). Apparently it's going to be a fairly large group, and whats funny is this is my graduating class, but I only know two guys in it! I'll try to post about it and maybe do a few photos, but I may not have a chance until after this weekend, in which case there will be (at least I intend there to be) a double post on my graduation and my first real gig with The Key of H at Delian Cornfield's birthday party.

Have a Great Weekend!

Check out this really cool blog I found. It's some girls from NY who ditched their jobs and started traveling thing World:

I really enjoyed reading it, so I thought I'd share it with you guys (the faithful few of you who read this blog)

I pretty much want to be just like them, except a guy, of course.

Our Church had a graduation party this afternoon. I believe it started as Alex's party, and then they were going to invite a couple other people over, and then after it was realized how many people were actually graduating it turned into a church wide event with T-Shirts and posters and all that good stuff. So yeah, here are a couple of photos from it: 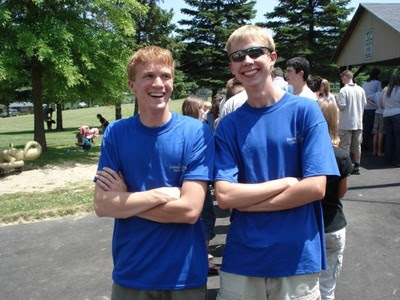 And Derrik, whom I am unofficialy naming Hitman D, becuase he kept on shooting people with that little water pistol when they weren't expecting it. 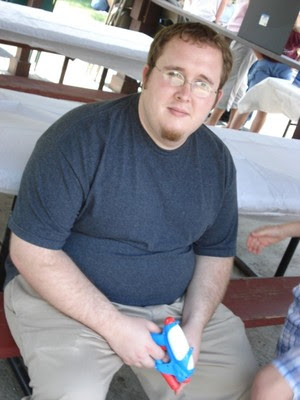 Imagine No Trees (Once There Weren't)

I thought that since school is done and over now that I might write something a bit educational - in an interesting way.

If you ever come out to my house, the main thing you will notice is all of the trees. There are trees everywhere, interspersed with occasional fields and houses. Most of the land around here is in fact forest, and its easy to think that it has always been that way... imagine Indians running through the same forest hundreds of years ago. Trees however are actually a rather new phenomena in this are (Corning too). Just sixty or seventy years ago, there were hardly any. Why? Logging. Around the turn of the century, the logging industry was at its peak in Pennsylvania and New York. All of the woods were chopped down and sent away to be made into boards and furniture and things. And this wasn't selective logging like you see today where people just go in and take the best trees, this was clear-cutting. Everything from two hundred year old giants to saplings were cut down. Thus, all of the trees (with the exception of a few big maples and oaks that they for some reason elected to save and can now be seen mainly in peoples yards, along roads or in parks) perished. My entire hill was bare, just grass. You know those nice long green hills the surround Corning and Gang Mills that people always go on about? Nothing but grass. Don't believe me? Just go to Wegmans and look at their collection of historic photos, they have on of Corning in 1900. If you look long enough you'll notice something different: no trees.

Fortunately this didn't last forever. The trees began to come back and in seventy or so years, nearly all of the trees that we see grew. This process is still going on. It's a fact that there are thousands more trees just in my township alone than there were when I was born. If you drive from my house to Mansfield, you can see hundreds of acers of farm and pasture land turning back into forest. This is a hill side about four miles from my house. Just a few years ago crops were growing in it. Now, as you can see, it has embarked on the path of reforestation with no hope of return (at least not without a great deal of money and effort, and the fact is, nobody is going to spend that much to grow something out here in PA when it could be grown just as well for free in Illinois or Kansas or somewhere that they don't have a great deal of trees that need to be cut down. 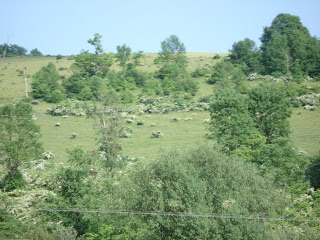 You always hear a great deal about the problem of deforestation (the process of all the trees being cut down) but it seems to me that at least in this small corner of the world, we have experienced all the the deforestation we are going to (at least until Bradford County is considered a Suburb of Philadelphia and Corning one of NYC, but that's a long time in the future) and our main issue is reforestation. Do you see the forest in the picture below? It's about a mile from my house, and, believe it or not, I can clearly remember a time when there was nothing there but grass and a few pricker bushes, but in the really, really short period of my life time, look at what has happened to it! 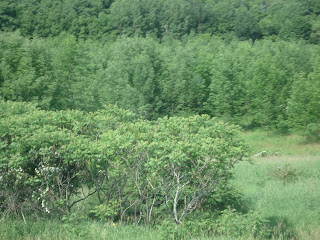 So, the next time you look outside at our hills and see all the the trees, remember that there was a time not to long ago when the view was very, and in my opinion unhappily different.

How to start a fire

Church went real well yesterday and the worship practice after that, but the highlight of the day was most definately the party at the E's to celebrate Emma's full recovery from the van accident. And I met the Roberts! Well, ok, I had actually met them a couple of times before, but this was the first time I actaully conected them with the people I new on Xanga.
We played ultimate, music and started a fire... and some people had their own ideas about how to do it:

Marty and the Red Corvette

I went to work this morning with Dad and Mr. Slack and got there before anyone else. Soon Mr. Polczinski arrived and everyone but Marty, our accountant/jewelry master/ delivery man/ salesman had got there. Now I was standing out in the parking lot putting away the leaf blower that I had just been using and all of a sudden and red corvet pulls in and who was driving it? Marty. He told me he had to drop somebody off in Wellsboro so he would be a little late getting in for the morning... now, unless you were in my position it probably won't strike you as funny the way it did me, but Marty has been with us for oh... must be at least five years and I knew him at our old Church for maybe seven before that... so a long time, and I never would have pictured him driving a vet... but he was, and as it turns out, although he was borrowing this one, he is somewhat of a connoisseur. So I went in side and told the guys with as somber a face as I could muster that "Marty just drove by in a red Corvette and said he would be late for work this morning." So anyways, it seemed really funny to me at the time. And later on he took me for a ride in it, which was fun.

I spent most of my time either trying to get all of these leaves and bark off of the gravel parking lot, which was rather tedious and riping up the big landscaped area in front of the office that we are going to redo. Now, this area was made when we first got the building about twelve years ago and we have kept putting down landscaping cloth and covering it with bark mulch to try and keep weeds from growing (rather unsuccessfully) so now there is a good bit of this stuff built up under the ground and I have to tear it out... not easy... and to complicate matters there is a open sewer line under it, so it's nasty.

We didn't have any customers walk in today which was a bummer because I didn't get to talk to them, but the guy did quite well on the phones and actually sold several as they did yesterday also, which is phenomenal for this time of year, usually are off season. But as it is now, there doesn't seem to be an off season because ever since gas jumped this winter we have almost had a hard time keeping stoves and stock and now, when people would generally be thinking about air conditioners, they are buying Greenwoods... which is good for us... and them, and the environment... so every bodies happy right?

Well, now, I'm at the office in Mansfield.... Just ate lunch.... And I'm afraid I'll be really sore tomorrw, becuase we are tearing up the bed in front of the office and that involved moving about 30 rocks some of which way well more than I do... and I was supposed to as for help on those, but, being foolish, I didn't. If I was 20 years older I probably would have flipped a disk. But not being 20 years older, I'll probably just be really sore tomorrow.

It's a beautiful day here in Mansfield. Not too hot but not at all chilly either and really sunny. I'll proabably do some more outside, but I need to get some of the guys to come, becuase I'm not doing anymore of those rocks on my own!!!

Pray for Misha, she had to be taken to the ER last night while I was at the M's new house party putting up drywalling. She has never been sick before (we are always jealous of her), well, she was sick once, but only very slightly so it came as a surprise two days ago when she got sick. And she hasn't gotten over it, so by last night she was very dehydrated (she gets that way easily). My Mom took her to the ER in Troy and shes back now and a bit better. 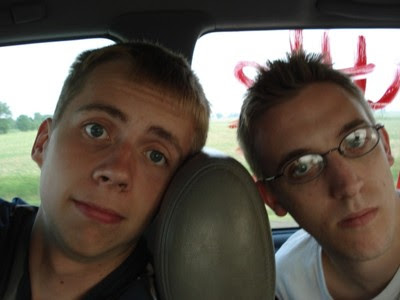 I took this classy double portrait on the way home when everybody was sort of out of it. PJ didn't realize I had taken it. For some reason this page crops it so if you can't see all of PJ's that would be why, it is in the picture though just click on it and it will show you the whole thing.
Posted by Andrew at 6/03/2007 03:03:00 PM 3 comments: 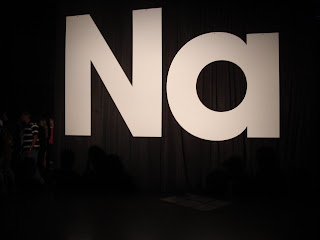 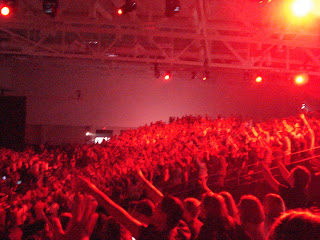 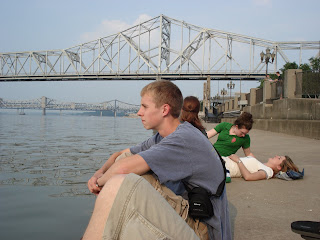 Chilling out on the Ohio Rv. 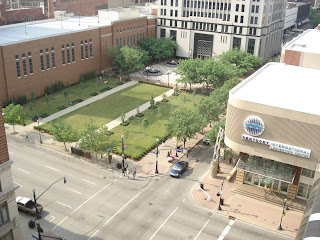 A view from our room. 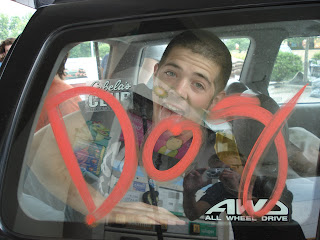 Jesse on the way down 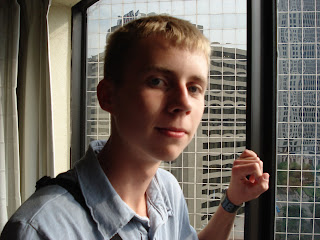 Myself at a our groups pizza party... it has been said by more than one person that I look like a computer generated image in this one. 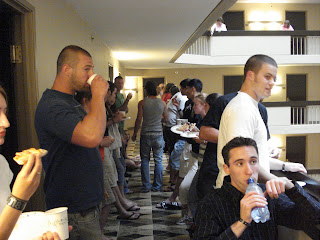 In the hallway. Our hotel was 18 stories tall and it was all open in the middle, so it was quite a drop over that railing that you see.

I have lots and lots more but I don't have time to upload them plus dozens of hillarious videos. Maybe they will end up in a production sometime... or you can come to my house and watch them : )