Got Chased by Coyotes!

Today for, the first time in my life, I was hunted (If only for a moment... I'm usually the one who does the hunting, and I like it that way!) by another species. The Coyotes came again. I was out at the end of our driveway. We were just back from Church and my parents had gone on a walk. I looked out across the field and I saw one (see first photo). I ran back to the house and, determined not to let another photographic opportunity go to waste, grabbed my camera, and gun. 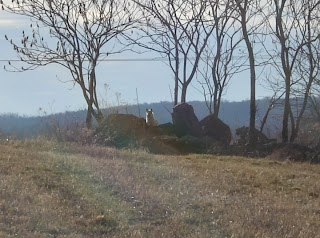 So I got about half way to the rock pile were this one was perched, and then I saw them.... The entire pack was just on the other side of the hill. And then, much to my displeasure (as well as shock, horror and a number of other emotions) they started yelping and charging toward me! So I thought "this is really bad!!!!" and took off running. Fortunately, a few seconds after I started, they stopped, turned around, and started in the opposite direction. Whether I scared them, or they decided it wasn't worth it, I shall never know, but they did. I took this picture just as they crested the hill. Then started to run. 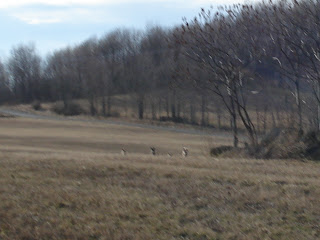 When my parents came back (my grandpa actually went out and picked them up after I told him about the coyotes) my Dad and I went out to look for them, but they weren't to be found. So on the way back I took a picture of a buck that they killed this winter. You know I would really hate to end up looking like that! 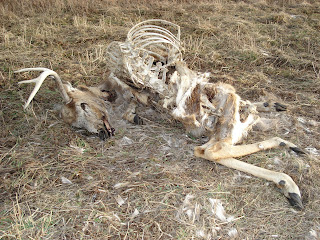 You are a brave man... and a little crazy... but you knew that. ;^) Henceforth, shoulder a shotgun when tramping through the fields. Bring ample ammunition. Whack dem dar dogs dead. The deer will thank you... well... maybe not, since you're out shooting at them too... but only for a few weeks out of the year, so yeah, maybe they'll thank you... maybe. But the coyotes? Buckshot is your friend.

More than likely an angel scared them off. Usually predators are excited by running prey... they don't usually turn around and run away in the other direction. You keep your Guardian Angels busy, don't you VanDrew? ;^)

Well I try not too... but I guess it does happen.

we would if they would just stay put lol