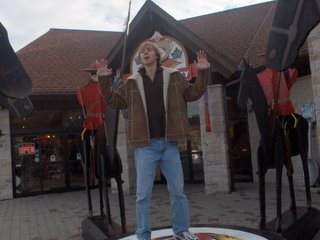 Got cought by these guys while north of the border. Scary, Eh!

I'll be spending the next few day's at my Grandparents house. My Dad and Mom are off to Vegas (don't ask, it's a long story) with the Micheljohns. Fortunetly, my Grandparents live just down the road, do I'll actualy be spending some of my time back here at the house. I don't know if I'll be able to get my computer working off my Grandpas network, so if I don't, I'll probably be spending a lot of the daytime up here since I need a computer for most of my school work.

So I did bunch of Advanced Aviation Science today, and did well on the end of chapter quize. That's because it was mostly just memorizing rules and protocal. It's all of the graph work that usualy gets me.

I think I want to start my own business. I simply can't think of any thing that I'd want to major in, so, since that's what my Dad does, I may just try it as well.

But this is just idol thought, so....

The Olympics are rather interesting this year. I guess the down hill people didn't know what they were asking for when they said that the course at Salt Lake was too easy! There have been so many accidents! Did you see that one girl on our team who's name I can't remember, fly like 10 feet up in the air, come down into a split and fly off the side of the track and through the snow fence! I was really impressed that she was back on the track tonight. And now Apolo Antwan (however you spell that) is back in competition too. I was really happy to see that. Wasn't are figure skater that came in second last night really wierd though! Not that I really wish to give him to much credit, but I was sorry to have him representing the U.S.

Got a lot of school yet to do this week. I have to do an essay question this week for history. And all my essays have really sucked ever since I've had to start writing them under the half hour time limit and without any prior research. I'm afraid it may start affecting my grade soon. But then, I believe they are graded on a curve, and there are others in my class who havan't been doing so well either to say the least, so perhaps it shant be to bad. But there are some people in there that can write like, a thousand word essay in under the time and have it be really good. I think I'm more around three hundred words, and it's something short of elequent.

Just thinking about all the school I have coming up nearly makes me sick! I have my ten page paper for the PA homeschool diploma program, I have an Bio essay due for AP history. I still need to do more with Aviation Science. And then theres debate and the SAT and lots of crazy stuff of that kind. And now I've been falling behind in my regular studies because of concentrating so much on the AP stuff.

hum... sounds interesting to say the least, don't stress out to much, not to say that you shouldn't try hard on school but it isn't something you should stress out about. that was kind of redundent, oh well... have fun while you parents are in los vegas!